CARL VON LINNÉ – THE MOST FAMOUS SWEDE AROUND THE WORLD

No doubt Carl von Linné is the most famous Swede around the world. That was also something I learned when I spent months in the United States of America, where many people did not know any other Swede. There he was called Linneaus, which was his name before he was raised to the nobility in 1757.

Carl von Linné travelled a lot in Europe in the 1730’s. In the Netherlands he graduated as a doctor in medicin. He visited botanical gardens in Holland, and he went to England to collect plants. In Paris he was offered a position at the Academy of Science, but he declined and went back to Sweden.

Carl von Linné became very appreciated also in Sweden. His students at the university of Uppsala liked him very much as a teatcher since he took care of them in a fatherly way. Many of the poorest of the students even got board and lodging in Linnés home.

Among his colleagues he was not as popular, and he was criticized for giving the plants parts name after human reproductive organs. That was “shameless behavior” as they thought. Linné was convinced that man after death returned to nature. He always started his lectures with the words “nothing is dearer to us than life, nothing is safer than death”. 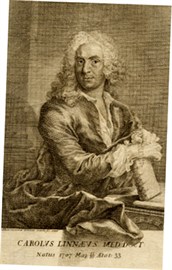 Linné made his journey through Västergötland in 1746. He came horse back riding from Borgstena to Borås and he describes it like this:

“The way to Borås went up, down and on the sides of steep hills, so the ground here is very different from the other nice places in Västergötland. The town slopes to a quiet river called Wiska which flows from Öresjön to the south on the west side of the town, with a good water, very suitable for the colouring factories.”

Linné thought that Borås was a “small, clean and nice town”, but still he soon went on to Alingsås. He wrote as follows about this part of his journey.

“I must call the land between Borås and Alingsås Wästgöta mountains, since it all looks like that.”