Borås is a modern city that has many sides. With its rich cultural life, vibrant city centre and many favourite little spots, there is something for everyone. Come along and discover your own side of Borås! With more than 100,000 inhabitants,

Borås is Western Sweden’s secondlargest city, and a city that is constantly changing. Some people think of Borås as a textile city. Others think of it as a city of sculptures, an entrepreneurial city, a shopping city or a design city. In fact, Borås is all of this. And a lot more.

The story of Borås begins with industry. Wherever you go today, you still encounter the large, beautiful industrial buildings that were built during the 19th Century. This is a legacy from the time when companies such as Algots and Borås Wäfveri put the city on the map. During the heyday of the textile industry in the middle of the 20th century, 70 per cent of the city’s inhabitants were employed in the textile sector.

Today, the wing-beats of history move in time to the machine noise of the past. The old industrial premises have been converted into the factories of the future, with modern research, technology and fashion design carrying on the textile city’s heritage. Borås is now a Nordic centre for the textile and fashion industry, with a long tradition and a bright future.

Few cities the size of Borås can offer such a large, rich and varied selection. Culture, shopping, good food, a lively nightlife and exciting experiences are always close at hand. And you will find something for everyone here!

It is clear to see that Borås is a city of culture and sculpture. The cityscape is characterised by world-class international art, and the Borås International Sculpture Festival is arranged here every other year. Best known of course is Jim Dine’s nine metre-tall Pinocchio, yet there is much more to see and be fascinated by. Join a guided sculpture tour or discover the City of Sculptures on your own!

Central Borås is home to cosy cafés, fine restaurants and exciting shops all tightly packed in. Visit an outdoor café at Sandwalls Plats, with views towards Viskan, or move between the bars after the sun has gone down. Or why not do both?

Borås has been named a Fairtrade City, a diploma awarded to municipalities that are engaged in ethical and sustainable consumption. In practice, this means that the municipality lives up to stringent demands as regards ethical procurement, conducts extensive information work and offers a wide range of Fairtrade products in shops, cafés, restaurants and workplaces.

Borås is a family city. Here you will find Borås Zoo, one of the largest zoos in the country and a popular destination for both children and adults, where you can easily lose a whole day among exotic animals and exciting activities. See the animals of the African savannah at close quarters, or visit some of Sweden’s large predators.

In Borås you will also find Navet Science Center, a building that is filled with natural sciences, technology, mathematics, culture and exciting experiments. Here, adults and children of all ages can play, solve problems and learn about everything from water in ancient times to the infinity of space.

In Borås you are never far from sights and adventures, and the city also has plenty of centrally located campsites, cabins, youth hostels and hotels. There are also several bathing places on the outskirts of the city. Perfect for playing and lazy days!

Borås is full of wonderful memories and fantastic experiences. All you have to do is come here and find them! 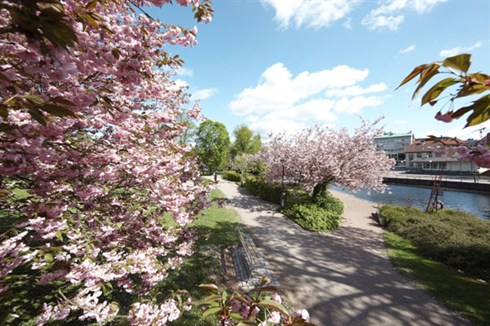 Find out more about Borås on boras.com